Support And Resistance In Forex Trading

Support and resistance in Forex trading is a technique used by many technical analysts to identify possible price reversals and pivot points in the market.

This article will explain how to identify support and resistance on your price chart and why it is an effective tool.

You will also understand how you can potentially use it to make better informed trading decisions.

Stick around until the end because 3 support and resistance trading strategies you can use are included.

With that being said, let’s get straight in to it.

What is support and resistance?

All markets work on the basic economic principle of supply and demand.

In the Forex market, when demand for a currency exceeds the supply of it, the price should go up.

When the supply of a currency exceeds the demand for it, the price should go down.

Good, that’s what was intended but it is a little more complicated than this.

That might sound contradictory but if there is no one else left to buy or sell, where do you think the price is likely to be heading? Usually in the opposite direction until it finds participants willing to buy or sell again.

In the Forex market, prices fluctuate up and down due to the imbalances of supply and demand or buying and selling pressures. At significant turning points in price, there is a momentary shift in these two forces.

In a bullish market, prices will continue to rise until they meet resistance. Resistance is like a ceiling that resists the price from going higher.

In a bearish market, prices will continue to fall until they meet support. Support is like a floor that supports the price from going lower.

The price is like a ball that bounces between the two but the floor and ceiling is constantly changing. 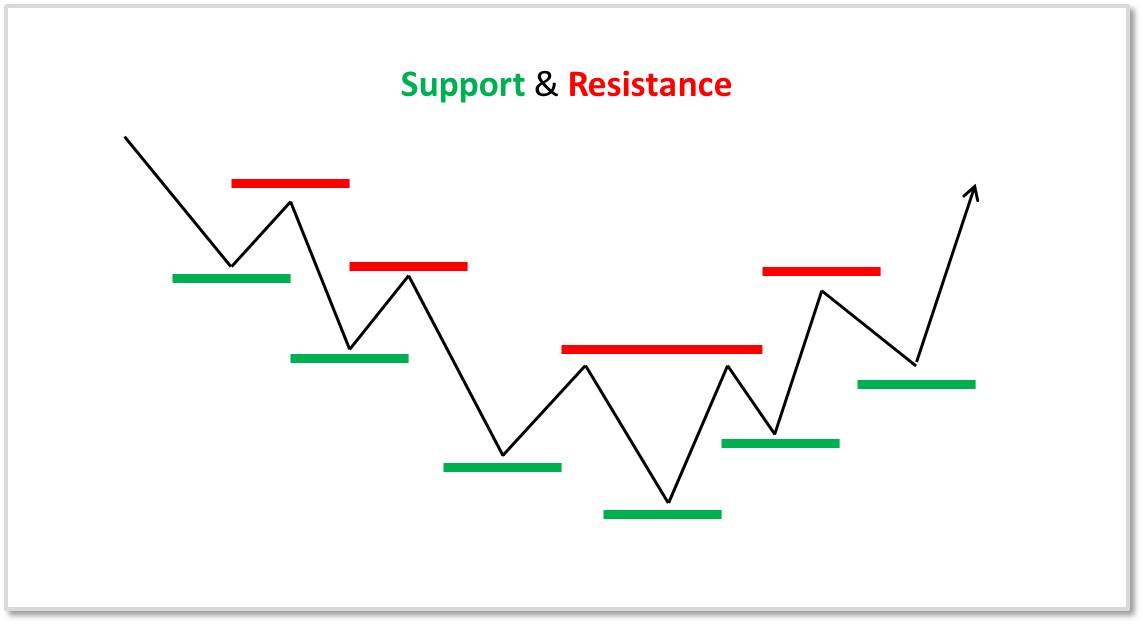 Imagine this ball bouncing up and down a multi level building.

Sometimes the floors and ceilings are like concrete. At other times, they could change to glass. One is solid and harder to penetrate; the other is fragile and could easily break.

The bulls defend the floors and the bears defend the ceiling. Whoever has the overwhelming force will break through and win. The other either retreats or tries harder to defend.

These are the basics of price structure and how price trends can potentially become established.

It’s like a battle between buyers and sellers trying to gain pips from the other.

How to find support and resistance levels

Open a price chart of a currency pair for any time frame.

What you want to do is look for obvious price areas that have been touched multiple times. A good support or resistance area will be like a magnet that draws or repels prices in both directions.

Also, another good way to find these price levels is to look for areas where support became resistance and vice versa.

One more way is to anticipate it when you have at least one significant turning point.

Support and resistance levels on the higher time frames are more significant than the lower ones.

Let me show you a couple of examples,

How to draw support and resistance lines

When you look at a price chart, just observe and let your eyes be drawn to the areas where price traded the most. You can find these at turning points.

These areas usually acted as both support and resistance in the past.

This is also where the most transactions (volume traded) occurred over time.

Can you see how the price pivots around the black horizontal lines?

Moving forwards, you can also anticipate support becoming resistance and resistance becoming support where the pivot hasn’t been establish yet.

These lines do not always act as support or resistance and you will also notice that the price over or under shoots these support and resistance lines sometimes. The market is irrational and this is not an exact science.

Try and draw a line of best fit that encapsulates many data points because support and resistance is just a guide that will help you identify price areas of interest.

When prices approach these areas, you should pay careful attention to how the price reacts around them. Seek additional confirmation before executing your trade.

Support and resistance are not exact lines but areas or zones

Trading using this technique is not an exact science.

What is important to take in to consideration when using support and resistance, is that they are not exact prices on your chart.

You should view support and resistance levels like areas or zones that are multiple price points deep.

How shallow or deep a support or resistance area will be depends on several variables. Such as, the volatility of the currency pair, current market conditions and price structure.

The chart time frame you are analysing and choose to trade on will also have a determining factor.

Why does support and resistance work?

So you might be asking yourself, well, why does this work?

There are reasons for this.

Firstly, the market has memory because it is made up of participants that can see the price areas where prices turned around in the past. So they look for trades and place their orders around these areas.

History also repeats itself in the markets, what happened before will likely happen again at some point.

Secondly, the market must trade towards the price areas where it will find the most liquidity so it can match buy and sell orders. It just so happens that most traders place their orders to buy or sell around these areas.

How to trade with support and resistance

Now that you know what support and resistance in Forex trading is, and why many traders use it;

Let me outline three scenarios that you can further contemplate and utilize in your trading strategy.

Use it to find potential reversals

Finding support and resistance areas to trade price reversals is probably the most common way traders use this technique to make trading decisions.

The premise is very simple;

Identify these areas and anticipate that price will bounce off of them and reverse direction.

This is what I mean;

Use it for a breakout strategy

A breakout occurs after price has been trading in some kind of range, then breaks out of the boundaries and continues trading higher or lower.

At some point, the established boundaries or recent highs or lows are no longer providing price support or resistance. When the price breaks out, this could potentially be the beginning of a trend reversal or the continuation of the existing trend.

Use it when bulls and bears get trapped

The final strategy is a bull or bear trap.

As the name suggests, the price behavior around support and resistance levels traps buyers (bulls) and sellers (bears) in to taking positions in the opposite direction of where price is intending to go.

This is how it works.

A somewhat obvious support or resistance area will be established and visible in the market. Then at some point, the price will make an attempt to breakout.

This induces buyers or sellers utilizing the previous strategy to take a position. Anticipating a trend reversal or continuation to unfold.

However, price does not follow through with any momentum but it turns around and continues trading in the opposite direction instead.

This generates liquidity in the market and traps traders in to taking losing positions.

Take a look at the below images to see what I mean.

The trap, once more obvious can potentially be used as a trading signal to trade in the opposite direction.

Key things to take away about support and resistance

Support and resistance can usually be found at turning points in the market on every time frame.

Although this is not an exact science, this technique can help you find general areas where price turned around in the past and might turn again.

This is because traders are eyeing these key price levels to see how the price reacts around them to execute their trades.

The higher the time frame, the more significant the support or resistance area is.

The number of times a price area has been tested could also indicate its significance. But it does not necessarily mean it is strong, it could be getting weaker with each attempt to break through.

Generally speaking, the price will usually do several things around support and resistance areas. Which is to bounce and reverse or breakout or trap buyers and sellers in to taking the wrong position.

Using this with other tools and techniques to help you make trading decisions is more effective than using it by itself.

Support and resistance is just guide to help you identify potential turning or pivotal points in the market.

Trade Responsibly: Trading Forex and CFD’s is risky. It is possible to lose your investment quickly when trading using leverage. You should consider whether you understand how CFD’s work and whether you can afford to take the high risk of losing your money. Do not trade with borrowed money or money you can not afford to lose.

Disclaimer: This website is for educational purposes only and is not intended to replace independent financial advice. All information is being presented with care and consideration to accuracy but no promises or guarantees are given. Forex trading is speculative in nature and involves uncertainties. All commentary expressed herein reflect the experiences, views and opinions of the author only. You can use these as guidance to better understand your options before deciding how you would like to invest or trade. By using this website, you agree that you are responsible and accountable for your trading and investment decisions.

Disclosure: This website contains affiliate links to third party products and services. It is a way for publishers to potentially receive compensation for providing free content. This does not have any additional costs to you if you decide to click through and make a purchase. Your support is appreciated.

Scroll back to top OptimizeFX.com